Thoughts on climate change and impact on aviation 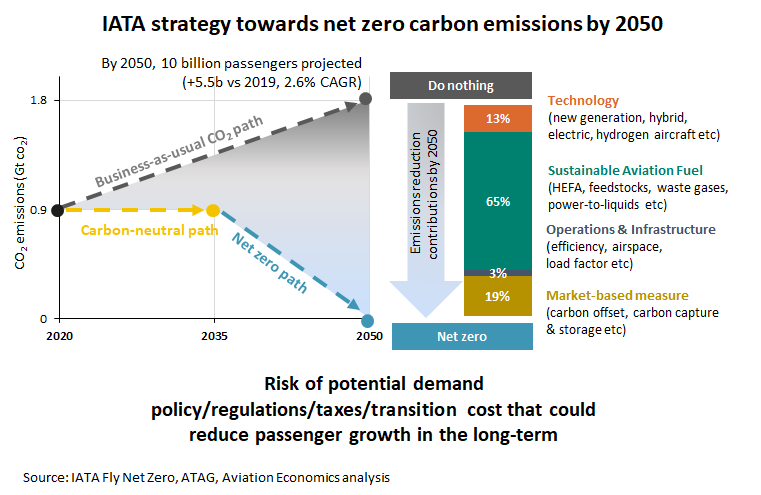 When forecasting future demand for air travel it is now more important than ever to recognise that the issue of climate change could have a significant impact on the aviation industry.

Aviation emissions have doubled since 1990 to 1 billion tonnes and account for 12% of all transport emissions. In September 2021 IATA announced that its goal was to be net-zero by 2050 despite forecasting that annual traffic will grow by 2.6% CAGR from 4.5 billion passengers in 2019 to 10 billion in 2050.

In the short term, the recovery from Covid-19 will likely have a larger impact than sustainability issues on air travel demand and where the traditional correlation between air transport and GDP growth will be more nuanced.

However, in the next decade decisions made by governments and global corporations will be critical in determining the sustainability of the global economy.

On 3rd November 2021, at the COP26 climate summit in Glasgow, the UK Chancellor Rishi Sunak announced that 450 companies controlling 40% of global financial assets – equivalent to $130tn (£95tn) – have agreed to commit to limit global warming to 1.5C above pre-industrial levels.

The aviation industry will need to be resolute in finding and mapping out the effective ways of decarbonising with a scalable increase in the use of sustainable aviation fuel (SAF) and developing new technologies including hydrogen and electric fuel cells. IATA’s strategy to achieve net zero emissions requires SAF to contribute two thirds of the reduction in emissions together with carbon off-setting, new aircraft technologies and efficiencies in operations and infrastructure.

While cost of air travel will likely increase in the future, the absolute demand level could be expected to continue to increase. However, policymakers and regulatory authorities will need to ensure that aviation demand can continue to grow sustainably.

If the timeline of measures towards the net-zero path proposed by the aviation industry is delayed, this could see the introduction of demand management policies or regulation in the form of taxation (binary or hypothecation) in the future, which could risk suppressing long-term air travel growth.

Long-term air travel demand forecasting will need to be scenario-based, looking at traffic and destination mix on an airport level driven by the traditional macroeconomic drivers as well as incorporating the dynamic impact of market-based environmental taxes, fuel and other potential cost of implementing the new technologies in the future. 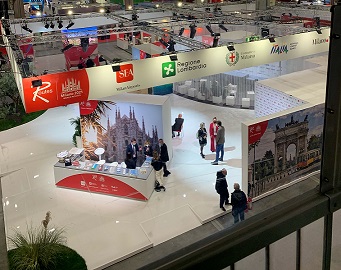 13th October 2021, Jo Hunt, our Associate Director has recently returned from the World Routes Conference in Milan. Here are her thoughts on the conference and the discussions she had.

“It was great to step away from the virtual world and see so many familiar and new faces over the last few days at World Routes in Milan. I enjoyed being able to discuss the industry that we all love and share our experiences over the last 18 months. It has become increasingly clear that there is a real need for airports to now be able to look to the future and understand what the recovery may look like, specifically the pathway back to operating at 2019 levels.”

At Aviation Economics, whilst we recognise that rising carbon costs and environmental taxation is inevitable, the COP26 conference is further proving the need for the industry to set out a credible roadmap to decarbonise aviation. Ensuring we do this will hopefully reduce intervention that could add cost and dampen demand during the Covid-19 recovery period and beyond.

Here at Aviation Economics, we provide short, mid and long term traffic, movement and emissions forecasts and there is an ever-increasing emphasis on the impact of climate change on our industry. Whether required for airport masterplanning, transaction due diligence, refinancing, airport growth strategy or network development, we use both top-down macro-economic and bottom-up forecasting techniques to provide an insight into what the future may look like. 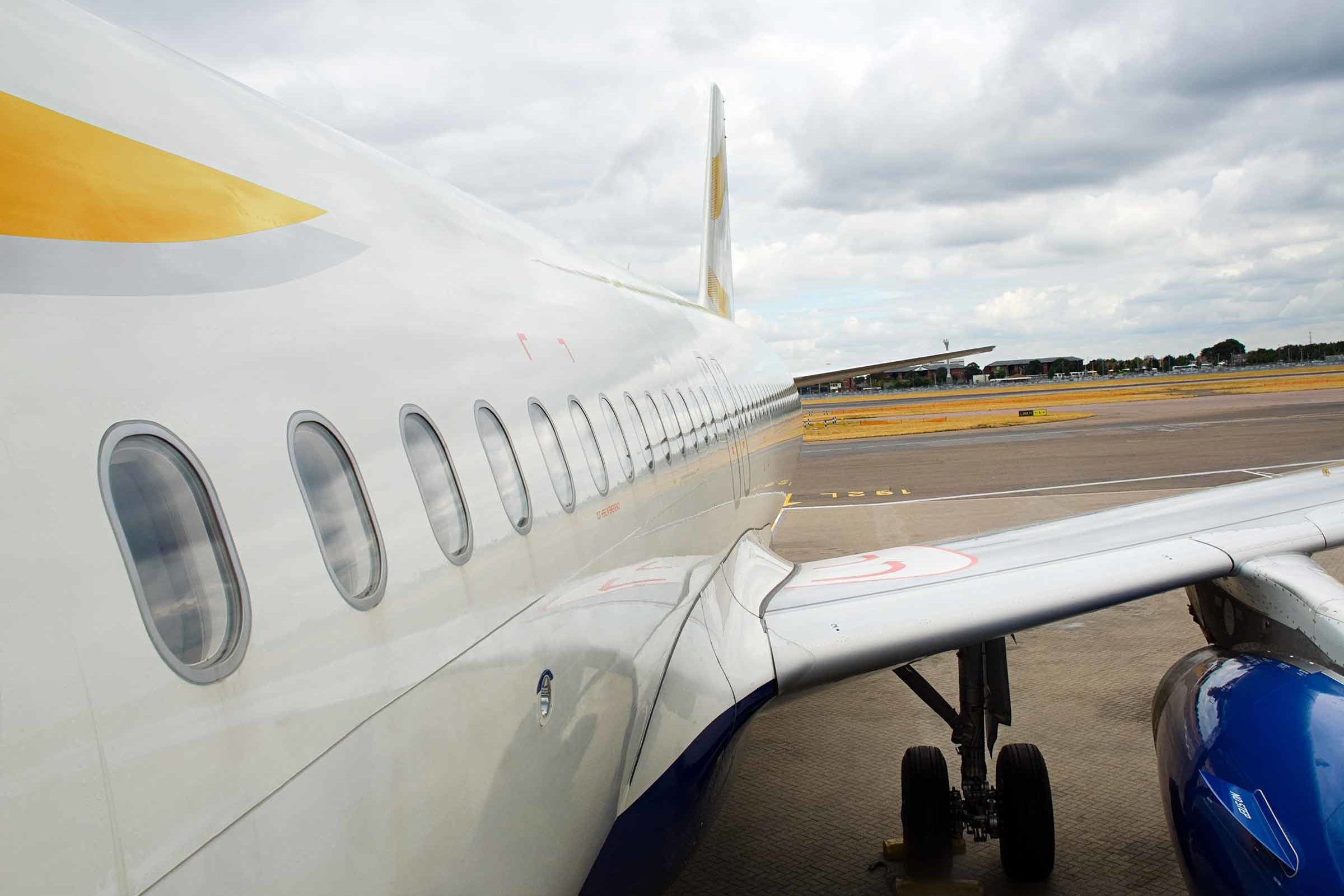 As the collapse in demand for air travel has caused market gaps coupled with the availability of aircraft and personnel, we are seeing a significant surge in airline start-ups globally. As is always the case, some are paper airlines that will not actually launch and many that do launch will probably be destined to fail. In this analysis, we look to see what trends there are in the business models being adopted.

The pandemic has created unimagined disruption for airlines around the world, with international border closures and individual country lockdowns also limiting domestic travel.

The drivers of new entry are:

The failure, restructuring or shrinking of incumbent airlines is creating gaps in the market which new entrants are seeking to exploit as and when travel resumes. From the tables below it can be seen that this is applicable in certain South American countries, Norway, South Africa and Italy where there have been either airline failures of capacity reduction as a result of restructuring.

An attraction for investors is that new entrants may be able to gain a financial advantage over incumbents, whose balance sheets are now burdened with debt taken on to sustain liquidity through the pandemic. For example, Norwegian’s business plan has the airline having $20m of debt per aircraft.

Pre-pandemic aircraft were in short supply and start-ups were unable to match the cost of ownership achieved by the large LCCs such as easyJet, Ryanair and Wizz in Europe. Lease rates have seen substantial falls across most types and lessors have immediate availability.

Aircraft and experienced airline staff, both of which were scarce resources prior to the pandemic, are now widely and inexpensively available.

Many members of the supply chain such as airports, ground handlers, caterers and maintenance providers have all been adversely impacted by lower volumes and will be open to providing attractive commercial deals.

The tables below shows the list of 36 start-ups by region.

Because many markets have shrunk in size, and may take a number of years to recover, the aircraft operated by many large airlines may now be too large for many routes. On short-haul routes the “standard” aircraft are either B737-800s of A320’s.

Where these large aircraft are too large this leaves a potential gap for airlines operating smaller aircraft that are better suited to current and future market sizes. That said, if demand does recover to previous levels this “opportunity” may be relatively short lived.

Most airline business models are represented by these start-up airlines, even unfashionable models such as long-haul low cost. Short-haul LCCs are perhaps best represented which is understandable given most forecasters belief that leisure recovers quicker than business and short-haul will recover quicker than long-haul.